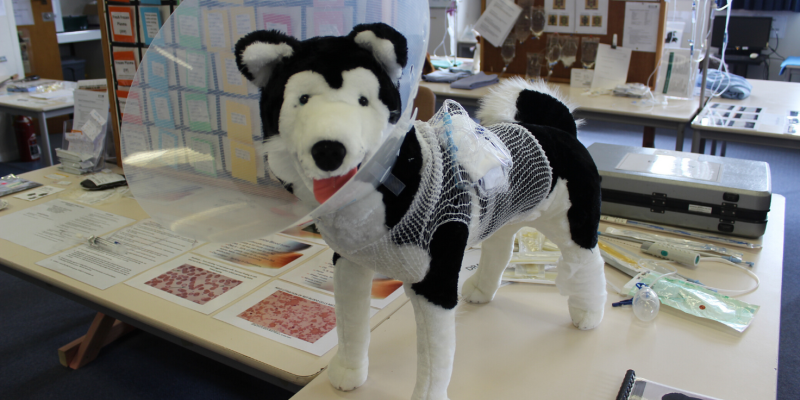 Examples of research, testing and teaching methods used in NZ that didn't involve the harmful use of animals.

Massey University in Palmerston North has a Veterinary Skills Laboratory which is essentially a room full of alternative methods to using live animals for training vet students. These methods are used by students to improve their clinical skills. Students can use bananas, oranges, teddy bears and fake skin to practice surgical skills on.

More sophisticated methods in their lab include interactive models such as:

While the use of these non-harmful tools isn't formally part of the curriculum yet, the Veterinary Skills Laboratory is open for students to come and practise in 24/7.

Otago Polytechnic uses a lot of different models and simulation manikins, some handmade and others purchased. They make their own mock iv simulators and their own fake blood, and instead of using ethically sourced canine cadavers, they now use canine dental models.

Opting out at Canterbury University

Ruby Reedy-Land, a student studying at Canterbury University, successfully opted out of an assignment that would have involved killing insects and pinning their bodies to a board. After defending her rights as a student, she was given an alternative assignment where instead of killing insects, she took photos of them.

Instead of using mice in cruel and unreliable experiments to test shellfish for toxins, the Cawthron Institute developed a chemical method of testing.

This method involves using certified reference standards for the actual chemicals that cause the toxicity to quantify the amount of these chemicals in shellfish. In other words, they measure the level of the toxic compound rather than the effect of that compound on a mouse.

The use of this more reliable non-animal-based replacement method means that thousands of mice are saved from pointless tests each year. No mice have been used by the Cawthron Institute for testing of the toxin since 2010.

One of our core beliefs is that animals aren’t commodities; they are sentient and capable of a wide range of emotions including pain, fear and happiness. It is therefore morally wrong to exploit animals. Hence, we do not condone the killing and eating of shellfish. We still wanted to highlight this example of a non-animal-based test method being utilised in NZ as it shows how much more reliable replacement methods can be.

The use of synthetic DNA by AuramerBio

Researchers from AuramerBio developed a way of making synthetic DNA (Aptamers) to replace the use of antibodies in diagnostic testing.

Harvesting antibodies usually involves the killing of animals so this replacement method is both more ethical and reliable. For example, better sensitivity and specificity can also be achieved with this method.

In short, this involves using a library of chemically synthesised DNA to try and identify what binds to the target molecule you are interested in.

When we asked one of the researchers involved what inspired the development of this, they said:

"We are inspired to bring the costs of all diagnostics down, so it becomes widely available. In doing so, we want to change the perception that science is dependent on animal models, especially in the diagnostics field. Synthetic biology is an upcoming field and we believe that aptamers will challenge the way diagnostics were traditionally designed using immunologically derived bio-receptors. Our aptamers will demonstrate that highly sensitive diagnostic tests can be developed without the use of any animals."

AuramerBio is working to use this technology to replace antibodies in roadside drug testing and fertility testing with handheld sensors which link to mobile phone apps to give speedier, more accurate results.

The Mental Health and Nutrition Research Group at Canterbury University conducts a lot of human-relevant and non-animal-based research.In fact, one of their members told us that their research group doesn't conduct any studies on animals within their lab or do any animal testing prior to receiving human ethical approval.

For example, they have conducted research on different vitamins and minerals, and if they had any effect on reducing the signs of depression in humans and if they can improve low mood and anxiety in pregnant women.

Read more about this research group and the studies they have been involved in here.

If you know of other non-animal-based and human-relevant research, testing or teaching methods being utilised in New Zealand, please let us know: nzavs@nzavs.org.nz.