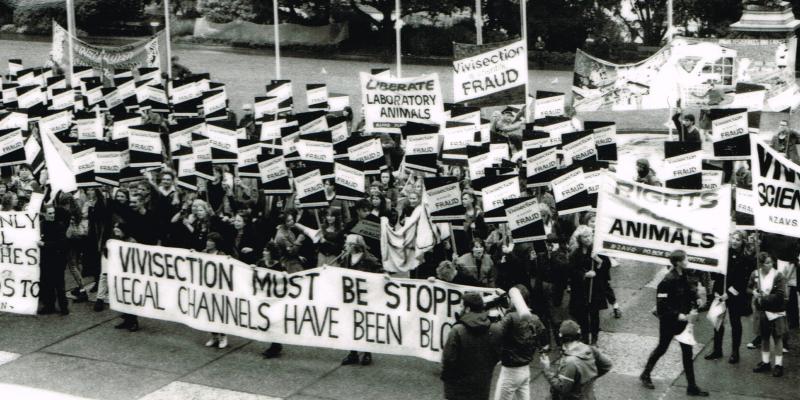 1978 - NZAVS was founded by Bette Overell in Wellington. The Society was based on the precept that vivisection is scientifically and medically misleading, dangerous and fraudulent. NZAVS adopted the principles established by medical historian Hans Ruesch and his scientific colleagues around the world. Ruesch's CIVIS Bulletins and his first book exposing the facts about vivisection were Bette's inspiration for forming NZAVS.

1984 - NZAVS presented its 1st petition to Parliament. This petition supported by doctors and scientists from around the world called for the abolition of the LD50 Test.

1985 - NZAVS distributed computer software for simulation of certain animal tests to all NZ medical schools and universities, asking them for feedback.

1987 - NZAVS launched its 2nd petition calling for the abolition of vivisection which received a total of 100,640 signatures. This was before social media, making it a huge achievement.

1989 - This petition was presented to Parliament on 24 April along with hundreds of submissions.

1991 - A parliamentary hearing took place for submissions on the petition to abolish vivisection in NZ.

1992 - NZAVS launched a national campaign against General Motors, Michigan, who had done crash tests using live pigs instead of human dummies since 1956. NZAVS organized spectacular marches in Wellington to mark World Day for Lab Animals from 1980 to 1992.  Similar marches were held in other centres.

1993 - Bette Overell published her book Animal Research Takes Lives - Humans and Animals Both Suffer to refute the false claims made by the Ministry of Agriculture in its booklet Animal Research Saves Lives.

1997 - NZAVS headquarters was moved to Christchurch with the purchase of Dight House, made possible through a generous bequest by Isla Dight.

2007 - Bette Overell, founder of NZAVS, passed away after a brief illness on the 11th of August.

2013 - Stephen Manson was appointed National Office Manager. Phil remained as Director until his retirement in 2014.

2013 – The NZAVS petition calling for the NZ Government to ban animal tests for psychoactive substances was submitted. The petition, supported by SAFE and RNZSPCA, gained 67,000 signatures (written and online.)

2014 – Thanks to a fierce, nationwide campaign, the government passed a law to ban animal tests for psychoactive drugs. Lush Cosmetics awarded NZAVS a major prize for our success in bringing about the ban. We joined the global ‘Be Cruelty-Free’ campaign.

2015 – We submitted the petition calling for the NZ Government to ban cosmetics testing on animals with the Humane Society International, HUHA and SAFE. The petition gained over 92,000 signatures. Then in April, a ban on testing cosmetics on animals in NZ passed! In May 2015, we launched a campaign to remove the requirement for the Draize test from NZ law. Later that year, it was announced that the requirement would be removed!

2016 – In May, we launched a campaign against the new $50 million animal lab that the University of Otago is building. Later that year, Tara Jackson, formerly NZAVS’ Campaign Manager since 2014, was appointed Executive Director.

2017 – We successfully convinced RANZCOG to end their plans to use live sheep in invasive training methods at their conference. We launched our children’s book The Six-Foot Rats, which is currently being distributed to all primary schools in NZ. We submitted our 'Out of the Labs' petition to Parliament which had over 15,000 signatures on it.

2018 – After talks with NZAVS, the Ministry for Primary Industries (MPI), announced their support for the rehoming of ex-lab animals in New Zealand.

2019 – A government report sparked controversy by mentioning the possibility of testing party pills on animals. We made sure this didn’t happen! We launched a campaign urging the Government to ban the Forced Swim Test in New Zealand and conduct a full review on the validity of all animal tests for psychological research.

We have multiple active campaigns and thousands of supporters, and we have a fiercely passionate team. We are lucky to be able to stand on the shoulders of our predecessors and continue paving the way to a compassionate future where animals, people and science flourish.

The near future – animal experimentation ends and NZAVS retire in peace knowing that one of the biggest injustices in the world has ended.