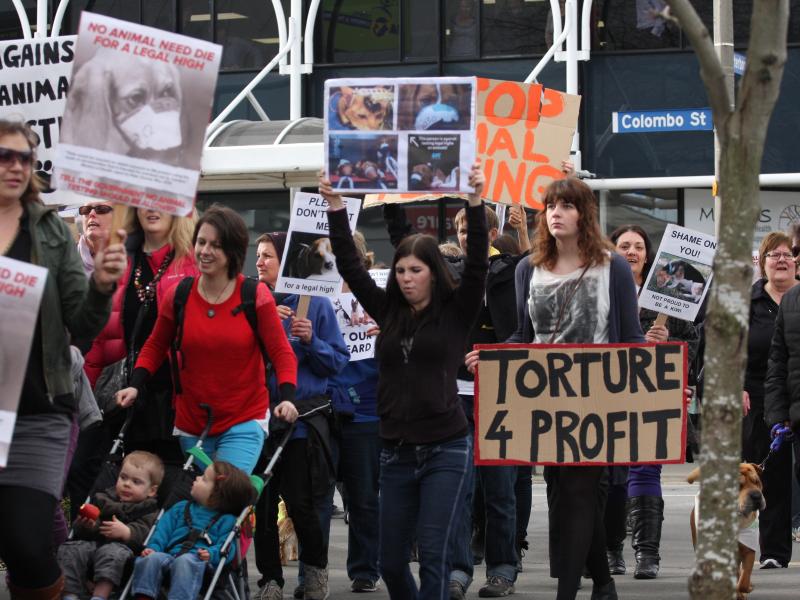 After so much work and effort had gone towards trying to stop any animal testing of legal highs the government still insisted it be allowed. Nearly 70,000 people signed the petition, hundreds made submissions, countless emails were sent to MPs and Ministers, many meetings with politicians were held, opposition parties supported an amendment to rule it out and still, the government insisted animal testing should happen.

This caused considerable outrage among people all around New Zealand. In response to that, the HUHA Animal Sanctuary instigated a day of protests around the country for the 30th of July 2013. Timed to coincide with MPs returning to parliament for the first time since their recess after rejecting the amendment from Mojo Mathers, HUHA announced their plans to protest on July 11 - leaving just 19 days to make it happen!

Volunteers everywhere quickly put their hands up to organise grassroots protests all around the country, from the top of the North Island in Kerikeri to the very bottom of the South in Invercargill. All in response to outrage over the government's inaction over an issue NZAVS initially brought to the public's attention in December 2012 with help from Mojo Mathers of the Green Party.

The team that organised the Christchurch march asked NZAVS to help with, and speak at, the march as our National Office is in Christchurch and we have done an extensive amount of work on this issue. We were, of course, glad to assist in any way we could and members around the country helped where they were able to.

The Christchurch Press reported that over 1000 people gathered in Christchurch and marched on the Christchurch Central National MP Nicky Wagner's office. While she wasn't in her office (all MPs were in Wellington - that's why the main march there was held on a Tuesday) we made arrangements to hand over more evidence on the failures of animal testing and of the many non-animal tests which was accepted by her office. This evidence was simultaneously being handed to government MP's offices all around the country, you can read it yourself too.

It was an extremely successful day with all the marches being well attended, which in turn drew a large amount of attention to the issue all over New Zealand. Such large numbers of caring New Zealanders haven't been seen out on the streets voicing their opposition to animal testing since the large popular NZAVS marches in the late 1980s and early 1990s, and the legal highs marches were just organised in a little under three weeks! Yet another indication of the level of public anger out there over the government's proposed use of animal testing to approve the sale of legal highs.