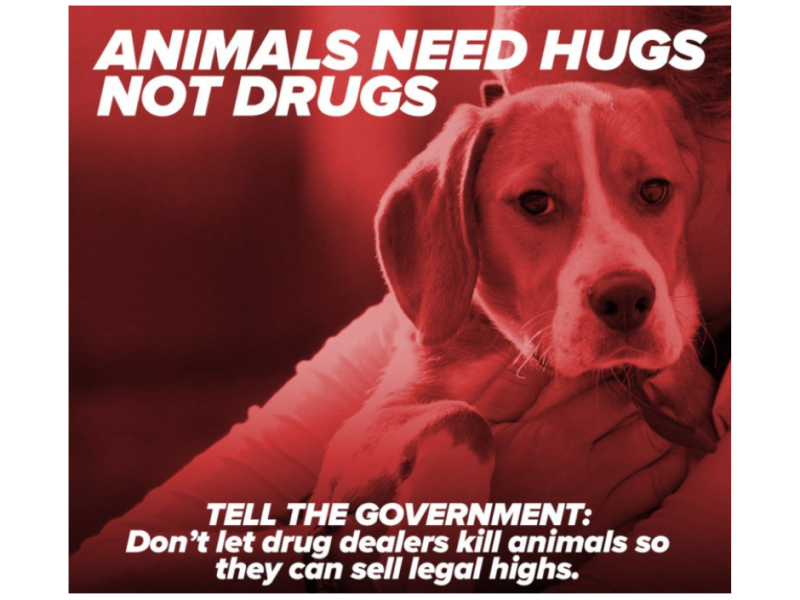 These synthetic recreational drugs are about to stop being sold with government approval, now we just need the government to not allow animals to be killed by the drug manufacturers to get them back in shops. It's been over a year and a half now since we've been asking Peter Dunne to not let animal testing of legal highs happen and he still insists it remains an option.

The government wants to know the drugs are of low risk but animal testing isn't needed to show this. Nine out of ten drugs tested on animals fail when they get to humans1. The data from animal testing gets it wrong more often than tests based on rigorous modern non-animal testing2.

We can't let the people making millions from selling these drugs kill animals so they can get their products on shelves again. If New Zealand wants them back on sale quickly and people to get harmed again then allow animal testing; if we want them to be required to pass a strict consistent testing regime that gets it right more often than one in ten times then don't allow animal testing. It might make it harder for the manufacturers but it's by far the best option for the public and the animals.

The two major opposition parties have confirmed they won't allow animal testing for this purpose and we congratulate them on this stance and hope Peter Dunne and the National Party see sense on this issue and follow suit. Both government animal advisory committees oppose animal testing legal highs3, as do the vast majority of New Zealanders4.

The fact that the current government is still insisting it be allowed in the face of such opposition is bewildering, especially when there are proven reliable non-animal tests available.

They ignored a petition asking for an animal testing ban that got over 40,000 signatures in six weeks but will they also ignore the advice of their own advisory committees? There's nothing stopping a ban on animal testing - if the drugs can't be shown to be safe with the best non-animal tests available sacrificing animals to try and show otherwise should not be allowed.

Billy the beagle in the image at the top of the page was rescued from a closed research laboratory by Huha. You can help by letting the government know that no animals, rats or dogs, should be put through what Billy went through.

What animals will be used?

In 2012 the Ministry of Health (MoH) put forward a possible testing regime to Hon Peter Dunne that included an extensive amount of animal testing on multiple species that included the LD50 test. NZAVS obtained copies of the advice the proposed testing regime was based on and details of the testing regime. After we brought this to the attention of Green Party MP Mojo Mathers a front page story on the Sunday Star-Times and Sunday Newspapers ran on 4 December 2012 that outlined the testing proposals.

The tests proposed included acute and repeat dose toxicity trials on rodents and dogs. Peter Dunne confirmed this at the time and said in the media that testing on dogs was "an unpleasant but necessary reality". Report to the MoH advising animal testing MoH proposal for animal testing News media coverage from 4 Decemeber 2012

What tests will be done?

Since the considerable public outrage on the idea of using animals to test recreational drugs the use of the LD50 test was ruled out. In line with advice submitted by NZAVS to the expert committee appointed by Dunne the proposed acute toxicity trials have also been ruled out. Details of what tests will be required are not finalised. It is looking like long-term repeat dose trials, genotoxicity trials and toxicokinetic investigations will be required.

Initially, the MoH was not going to require reproductive toxicity trials as they considered warning labels like are required for cigarettes and alcohol enough - it is considered inevitable that such drugs will be harmful to foetuses. Since then though we have been told that they may be required after all.

The Psychoactive Substances Act requires any animal testing to meet the International Conference on Harmonisation guidelines for multidisciplinary testing of pharmaceuticals. Animal trials for repeat dose trials under these guidelines require tests on both small and large animals. The small animals used are typically rats or mice, the large animals are usually dogs but in a minority of cases, monkeys are used.

Two of the three genotoxicity trials proposed by the MoH do not use animals, a third does. These trials are done to try and find out if a drug causes genetic damage. If it does it is a reasonable indication it may be carcinogenic. Long term carcinogenicity trials have not been proposed at this stage as far as we know. Toxicokinetic trials investigate how a drug is metabolised by the body and passes through it. Crude animal trials developed decades ago basically just require animals to be exposed to a drug by the same route humans will be for a period of time then they are killed and dissected so any organ damage can be looked at. The details of all these tests are outlined in the above advice to the MoH and the MoH report.

What are the non-animal tests available?

For all of the types of tests that the MoH is considering, non-animal tests are available, many of which are already approved for regulatory use for pharmaceuticals. The NZAVS submissions on both the Psychoactive Substances Bill and the Animal Welfare Amendment Bill contain extensive information on the many non-animal tests available. The most recent of the two is below, most of the information is duplicated between the two as the National Party members of the Health Select Committee refused to consider our submission opposing animal testing. The image below from the July 2013 issue of our magazine compares some of the animal tests with their non-animal counterparts.

For details on these and many more non-animal tests: NZAVS submission on the 2013 Animal Welfare Amendment Bill supporting a ban on animal testing of legal highs