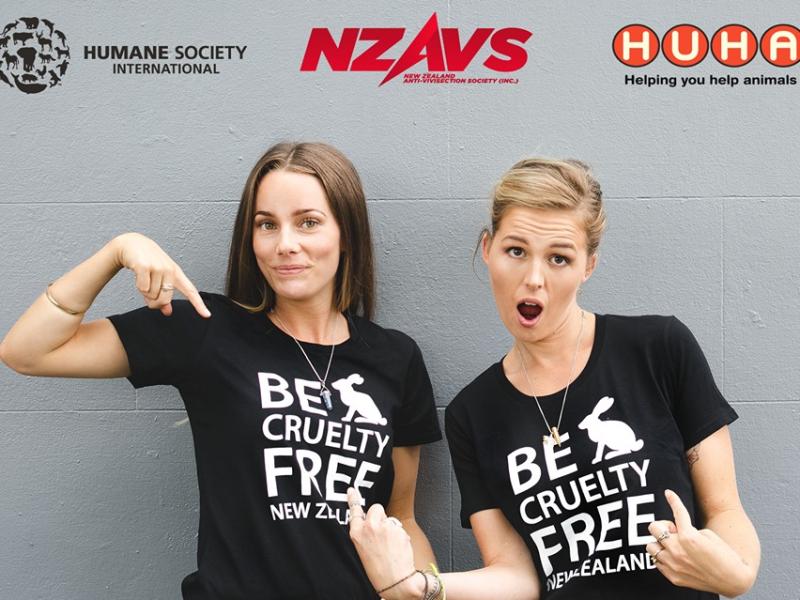 The Be Cruelty-Free campaign to ban animal testing of cosmetics in New Zealand just got bigger and stronger, as two leading animal protection groups come on board. Joining forces with Humane Society International which has led the high-profile initiative for the past two years, the New Zealand Anti-Vivisection Society and Helping You Help Animals now bring even more campaign power to Be Cruelty-Free.

"We're thrilled to welcome our new partners to Be Cruelty-Free New Zealand and look forward to working with them to end cosmetics cruelty. Testing cosmetics on animals benefits no-one. It hurts animals, it fails to adequately protect consumers and it holds back science. New Zealand has a real opportunity to change that, but policymakers need to support a ban now. Our Be Cruelty-Free campaign is now stronger than ever to achieve that goal."

The campaign's expansion comes in the wake of an announcement last week from the Labour Party that it will ban both cosmetics testing on animals and the sale/import of animal-tested products should it win the upcoming General Election this September. But a proposal to ban such testing has been in play since March when Green Party MP Mojo Mathers introduced an amendment in Parliament for a test ban as part of the Animal Welfare Amendment Bill.

This is an exciting time for us (NZAVS) to be joining the Be Cruelty-Free campaign. Globally, it's the biggest campaign in the world to end the cruel and unnecessary practice of cosmetics animal testing. And here in New Zealand, it has put the issue on the political map. An end to cosmetics cruelty is what consumers want, it's supported by industry and championed by the world's largest cosmetics market, the European Union. New Zealand's politicians need to hop to it and get this ban done, fast.

Be Cruelty-Free's goals have strong public support in New Zealand. Opinion polls show that 88.6% of Kiwis want a ban on cosmetics animal testing.

The United Kingdom stopped this cruelty nearly 20 years ago, and it's now banned across the whole of the European Union, as well as Norway, Israel and India, with more countries debating legislation as we speak. This is New Zealand's chance to show it is part of this tremendous global shift towards cruelty-free cosmetics.

In animal tests, rabbits, guinea pigs and other animals endure considerable suffering. They can have cosmetic chemicals dripped in their eyes, spread on their skin or force fed to them in lethal doses. Although it is believed that cosmetic animal testing seldom if ever takes place in New Zealand, it is still legal to sell cosmetics that have been animal-tested abroad.