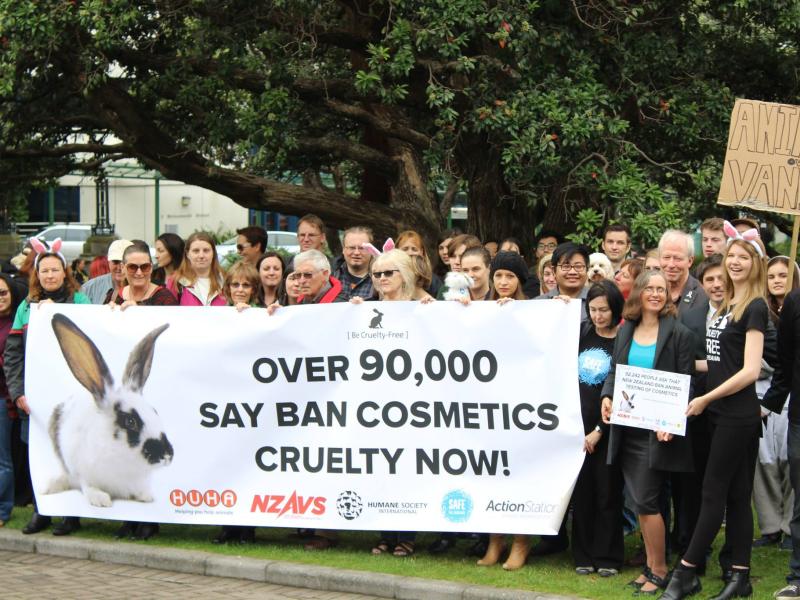 We came together with our #BeCrueltyFree partners HUHA, and the Humane Society International, and were also joined by SAFE and Action Station to show our support for a total ban on cosmetics testing on animals in NZ.

We were there to represent the 92,000+ people from around the globe who wrote to the NZ government asking them to support the ban. Over 86,000 people from all around the world had signed the Be Cruelty Free action on the Humane Society International website and we were proud to add that to the thousands who had also signed other actions within NZ!

We were joined by Green MPs Mojo Mathers, Steffan Browning, Gareth Hughes, international model Anna-Lisa Christiane and were supported by the unfortunately absent Miss Universe NZ, Rachel Millns. Though Rachel couldn't make it to Parliament at the last minute she did get to talk to her local paper about how important this campaign is to her, click here to read the article.

We need to play our part in the global campaign to end cosmetics animal testing - as the testing moves around the world easily we need to ensure NZ doesn't become a dumping ground for the world's last animal testing of cosmetics. As it is banned in more and more countries we don't want NZ to be one of the last places it can be done. He also highlighted how we need something concrete in legislation to rule it out - trying to count on the Animal Ethics Committees to not approve any testing will never work as they are inconsistent and inherently flawed so as to favour allowing animal testing.

Be Cruelty free campaign supporter Anna-Lisa Christiane spoke passionately about why the campaign means so much to her and presented Mojo Mathers, MP, with a certificate to symbolise the names of the people that had asked the government to support her amendment (the data files with the details were also given to Mojo).

Thank you so much to everyone who came today and to Jo Moore and Greta-Mae McDowell for the photography. It's time to ‪#‎BeCrueltyFree‬ NZ!