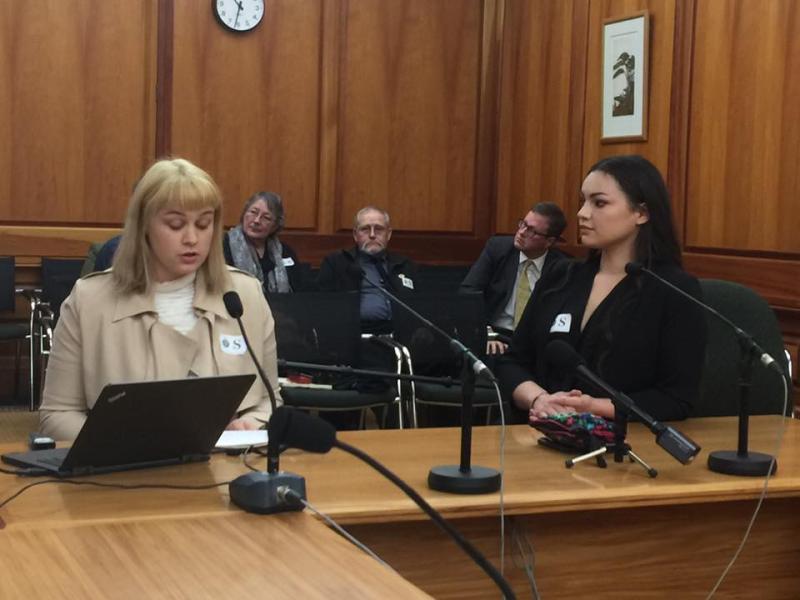 NZAVS headed to the capital to present to the Primary Production Select Committee about the 'Out of the Labs' petition that was recently handed over to parliament.

July 6th 2017: NZAVS Campaign Manager, Cressida Wilson and Executive Director, Tara Jackson went to Wellington to make a presentation to the Primary Production Select Committee about the Out of the Labs petition that was handed into Parliament on April 27th, by NZAVS and HUHA.

This petition asks the government to introduce a mandatory retirement policy for ex-lab animals. This would require labs and the facilities that breed animals for the purposes of research, testing, and teaching to attempt to rehome animals through registered animal rescues before euthanasia is considered. Read more here

Presenting to the Primary Production Select Committee was the next step in the petition process, beforehand a written submission giving more detail around the proposed changes to the Animal Welfare Act was submitted to Parliament by NZAVS.

Summary of our presentation to Parliament

In New Zealand each year between 220 – 300 thousand animals used for research, testing, and teaching.

In 2015 (most recent data available):  88,200 animals euthanised immediately following the completion of research.

The ‘social license’ for animal experimentation is based on the expectation that animals are well cared for in laboratories and that researchers are committed to the minimisation of harm through the adoption of the 3Rs Principle: Replacement, Reduction, and Refinement. The 3Rs are also included in the Animal Welfare Act 1999.

Researchers themselves promote these beliefs:

“Our “duty of care” towards animals highlights our obligation to meet the welfare needs of all the animals we control or own. This means providing for their nutritional, environmental, health, behavioural and mental needs,” the Australian and New Zealand Council for the Care of Animals in Research and Teaching Ltd (ANZCCART)

The Out of the Labs Petition was partly inspired by the 2011 rescue of beagles from the Valley Animal Research Centre by our collaborative partner, Helping You Help Animals (HUHA). These beagles have been rehabilitated and rehomed by HUHA, and have become loved and loving companion animals. Professional animal rescuers have the expertise to determine which animals will overcome their experiences and have a fulfilling life after research.

NZAVS are asking that the New Zealand government amend the Animal Welfare Act 1999 to include a mandatory retirement policy for ex-lab animals.

This would ask research facilities to make a good-faith attempt to rehome any animals who survive the research process – most likely this would simply involve a phone call or email to their local rescue.

We would ask that the animals used for breeding animals for research also be included.

Similar Reforms in the USA and Australia

The ‘Beagle Bill’ has been successfully passed in 5 States in the USA and is pending in 5 others.

The Australian code for the care and use of animals for scientific purposes has included a provision since 2013 that ‘… opportunities to rehome animals should be considered wherever possible.’

New Zealand has already enacted constructive reforms to animal testing policy, including the prohibition on cosmetics testing and experimentation on non-human hominids. This is an opportunity for New Zealand to be among those who set the standard for this type of legislative reform.

NZAVS’s recommendations for the wording of the amendment:

A person or facility shall after the completion of any testing or research involving an animal make a reasonable effort to offer the animal for adoption through a animal rescue, shelter organisation, or society.

Nothing in this section shall create an obligation upon such an organisation to accept any animal offered by a research facility for adoption.

Some details of the research conducted must be provided to the rescue, shelter, or society, in order to aid with rehabilitation and adoption of the animal/s.

Details of the animals offered to rescues, shelters, or societies shall be included in the animal usage figures provided to the Ministry of Primary Production.

NZAVS is compiling a database of animal rescues and would be happy to be the first point of contact for research facilities. HUHA is happy to coordinate the rescue of ex-lab animals in the Wellington region.

How can you help?

It is important that MPs know that you care about this issue. Together, we can encourage Parliament to seriously consider our proposal for the introduction of a mandatory retirement policy for ex-lab animals!

Send a message to your electorate MP and MP’s in the Primary Production Select Committee here. You can also help by making a donation to NZAVS so that we can continue to work towards ending animal testing in New Zealand — Donate today