DONATE NOW
NZAVS and HUHA Present at Parliament to 'Let them Live out of the Labs' for a second time! 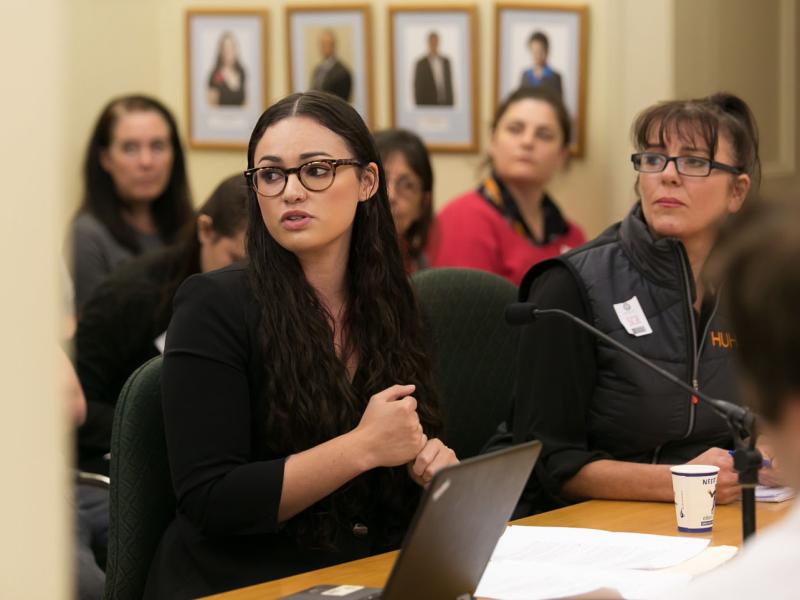 NZAVS and HUHA Present at Parliament to 'Let them Live out of the Labs' for a second time!

We were invited back for a second time to talk to the Primary Production Select Committee about our Out of the Labs petition.

Last year (July 14th), NZAVS were invited to present to the Primary Production Select Committee about the 'Out of the Labs' petition that had just been handed to the government. This petition asked the New Zealand government to amend the Animal Welfare Act 1999 to include a mandatory retirement policy for ex-lab animals.

The elections happened before this committee had time to report back to us with their decision. The post-election Primary Production Select Committee membership now consists of different MPs. Because this is such an important issue, we wanted to make sure that all of the relevant decision-makers could have the opportunity to hear our case in person, so today we returned to parliament to present, once again on our Out of the Labs petition.

The presentation went well, and several members of the public attended the presentation to show their support. We were lucky to have Green MP, and Animal Welfare Spokesperson Gareth Hughes MP attend to show his support as well.

We want to thank the members of this committee for hearing us speak today. The committee is made up of the following MPs: David Bennett MP, Jo Luxton MP, Nathan Guy, Kieran McAnulty MP, Mark Patterson MP, Stuart Smith MP, Rino Tirikatene and Hamish Walker MP for Clutha-Southland.

Now we have to wait and hope that the Primary Production Select Committee make the right decision! We will update all of our supporters as soon as we find out what they have decided.

The change we are asking for is small, but it would have a huge impact on the lives of lab animals all across New Zealand!

A quick summary of our presentation:

Every year thousands of animals are killed in New Zealand after being used for experiments. The New Zealand Anti-Vivisection Society (NZAVS) and Helping You Help Animals (HUHA), want to work with facilities which are legally allowed to use animals for research, testing and teaching (RTT) to save as many of these animals as possible. We need our government's help to make this happen.

What we are asking for - A Mandatory Retirement Policy:

Why we are asking for this amendment:

We’ve seen first hand the kind of fulfilled lives that ex-lab animals can have, and we want to ensure that more animals will have this chance.

The Out of the Labs Petition was partly inspired by the 2011 rescue of beagles from the Valley Animal Research Centre by our collaborative partner, Helping You Help Animals (HUHA). These beagles have been rehabilitated and rehomed by HUHA and have become loved and loving companion animals. Professional animal rescuers have the expertise to determine which animals can overcome their experiences and have a fulfilling life after research.

NZAVS also adopted two ex-lab rats last year. We were able to rehabilitate these animals into loving companion animals, and they ended up having a great life with us. Giving these animals a second chance helped fuel our desire to see this amendment made in NZ law. More animals like Archie and Monty should be given a life outside of the laboratory. You can read more about them here

While NZAVS are against most forms of animal experimentation and this amendment wouldn’t directly stop the experiments which we would deem scientifically flawed from happening in the first place, it would give animals who have spent their lives inside a laboratory a second chance.

Thousands of Kiwis want to see this change as well - Over 16,000 people signed our petition which was handed to parliament on 27th April 2017.

We believe that we have the resources and level of public interest needed to rehome many different species of animals, especially the species that are commonly killed in NZ during or after experimentation (rats, mice, rabbits etc.).

How we will assist:

HUHA: HUHA is one of the largest animal shelters in NZ. They have shelters in three different locations and their own vet clinic. A fourth HUHA shelter is currently being built.  They can rehabilitate ex-lab animals and make sure they are vaccinated, de-sexed and microchipped before they are rehomed.

HUHA are willing and able to act as the first point of contact for facilities in NZ who have ex-lab animals needing to be rehabilitated and rehomed. Although they are based in the North Island, they can take in animals from all over NZ.

NZAVS: We are compiling a database of animal rescues and would be happy to take on ex-lab animals, rehabilitate them and then rehome them. We have had confirmation from 33 different rescue and rehoming facilities for animals around NZ that they would be willing and able to take on ex-lab animals. We have a database with info on these facilities such as location, how many animals they could take, species they could take etc. There are still over 100 other rescue and rehoming centers in NZ to contact. These facilities can be contacted if HUHA is unable to take of ex-lab animals at any given time.

NZAVS also have an ever-growing waitlist for people who are wanting to adopt an ex-lab animal themselves. This gives us the ability to assist animal rehoming centers in finding animals loving homes when HUHA and other shelters can’t find suitable homes.

We often get contacted by members of the public who are interested in adopting ex-lab animals, especially rats and mice, as these are easy animals to keep as pets. Given the opportunity, we could help provide these people with a new pet and in turn decrease the number of animals needlessly killed in NZ annually.

Similar Reforms in the USA and Australia

The ‘Beagle Bill’ has been successfully passed in 5 States in the USA and is pending in 5 others.

The Australian code for the care and use of animals for scientific purposes has included a provision since 2013 that ‘… opportunities to rehome animals should be considered wherever possible.’

New Zealand has already enacted constructive reforms to animal testing policy, including the prohibition on cosmetics testing and experimentation on non-human hominids. This is an opportunity for New Zealand to be among those who set the standard for this type of legislative reform.

We should be aiming to be world leaders in animal welfare and pave the way for other countries to make a similar legislative change to give ex-lab animals a second chance.

NZAVS recommendations for the wording of the amendment:

Note: We are only asking that facilities “try” and rehome the animals that have been used for RTT in NZ to willing and able research facilities.

Recommended location of such an amendment: