DONATE NOW
Out of the Labs – Let’s get the facts straight! 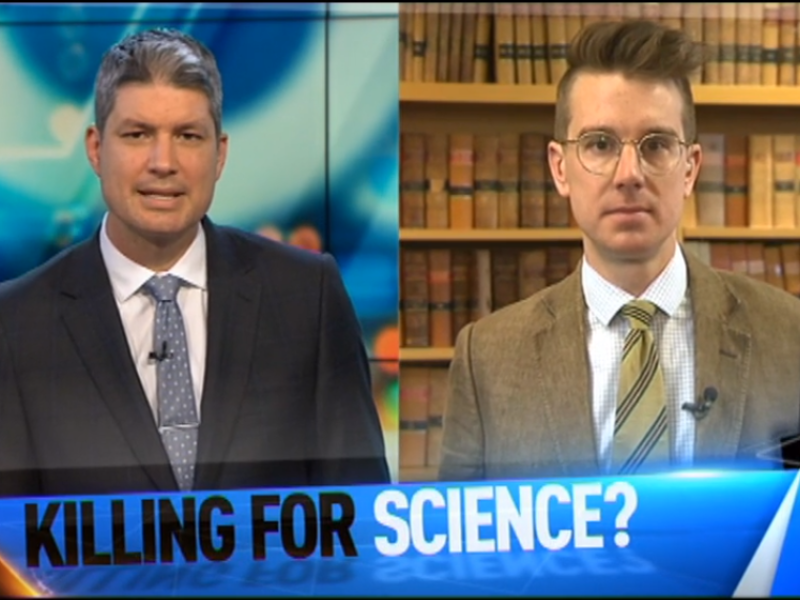 Out of the Labs – Let’s get the facts straight!

We've heard several statements made by MPs or researchers about our campaign that are misleading and don't reflect what we are truly asking for! This means that they are either misinformed, not informed enough or the media has taken what they have said out of context. We wanted to clear up a misleading story that recently aired on national television.

Recently the Project featured a story about our Out of the Labs Campaign. Our Executive Director Tara Jackson and the Director of HUHA, Carolyn Press-McKenzie were both interviewed for this!

They also interviewed a friend of ours - Marcelo Rodriguez Ferrere, a Senior Lecturer at the University of Otago. Prior to the interview, Marcelo was only provided with the very misleading report from MPI which implies that the mandatory retirement policy that we are asking to be established in NZ for ex-lab animals, is impractical and unrealistic.

In reality, we’re not saying that 100% of lab animals must be rehomed, we know that highly invasive experiments are done in NZ, so this wouldn't be viable. But what we are saying is that NZ needs a legislative incentive to encourage facilities to “try” and rehome animals before euthanasia is considered. It’s not a big ask and it’s something that Australia already have in place.

We have also made it clear that the legislative incentive should clarify that these animals only go to willing and able rescue centres, like HUHA. The last thing we want to do is create more stress for already over-run rescue and rehabilitation centres who rely heavily on volunteers and donations.

In Australia, The Australian code for the care and use of animals for scientific purposes has included a provision since 2013 that '… opportunities to rehome animals should be considered wherever possible'.

MPI and other MPs and researchers keep talking about the cases where animals couldn’t be rehomed. They are avoiding talking about the animals that could be rehomed – these are the animals that this legislative incentive would save. They continue to emphasise how impractical it would be to rehome “farm animals” in NZ which is very misleading as it would be rare that we would be given the opportunity to rehome these types of animal.

This also contradicts what they have said in the past — The below statement was taken directly from a report written by MPI themselves.

“The high survival rates (96.2 percent) for livestock reflect the number of trials of low invasiveness that take place while the animals remained in their normal farm environment and continued as part of the herd/flock at the conclusion of the trial. On the other hand, only 3.3 percent of rodents and rabbits remained alive following projects.” – Taken from the Statistics on the Use of Animals in Research, Testing and Teaching in New Zealand in 2015, Report.

The main animals we’d get to rehome would be rats, mice, guinea pigs, rabbits, cats, dogs and other small animals. We already have a long list of people who would love the opportunity to rehome an ex-lab rat or mouse.

We’ve since talked to Marcelo and have provided him with factual info about our campaign. We decided to clarify things and ask him a few questions:

Do you think your opinion on the Out of the Labs campaign was portrayed correctly on the Project?

No. My position is a little more complex than it was portrayed. My core concern was (and remains) that volunteer groups, like the amazing HUHA, do not receive any public funding or support, and that there was an element of unfairness that such organisations would bear the (significant) cost of rehoming animals used in RTT, especially since those who engage in RTT largely receive public funding. Moreover, as was mentioned a little more at the end of the interview, I think there are much bigger problems with the RTT regime in New Zealand, and I was additionally concerned that small changes such as this might give leverage to those resisting larger changes. I regret that it appeared that I did not agree with NZAVS - for the reasons below, I do.

Now that you know more about the campaign, would you support a legislative incentive being established in NZ to encourage the rehoming of ex-lab animals?

Yes. I’m upset that the Primary Production Committee’s report on this matter didn’t fairly represent NZAVS’s position. I support the Australian approach but wasn’t aware that was what NZAVS was advocating for - it was portrayed in the report as mandatory rehoming compared to mandatory consideration of rehoming where possible - two very different things. I’d be concerned about the practicality of the former and the burden it would put on community groups, but as I said in the interview, the latter is a laudable approach and has my support.

Do you think it is practical to copy the legislation that Australia currently has in their code for the care and use of animals for scientific purposes encouraging the rehoming of ex-lab animals where they are able to?

Our system is quite different to Australia - but I think it would be more than practical to include a consideration of rehoming animals where possible whenever someone applies for approval to engage in RTT. The Animal Welfare Act 1999 already requires mandatory consideration of various aspects of animal welfare when people apply to engage in RTT, and this could simply be an additional consideration. It would not be difficult at all.

Read more about our campaign here