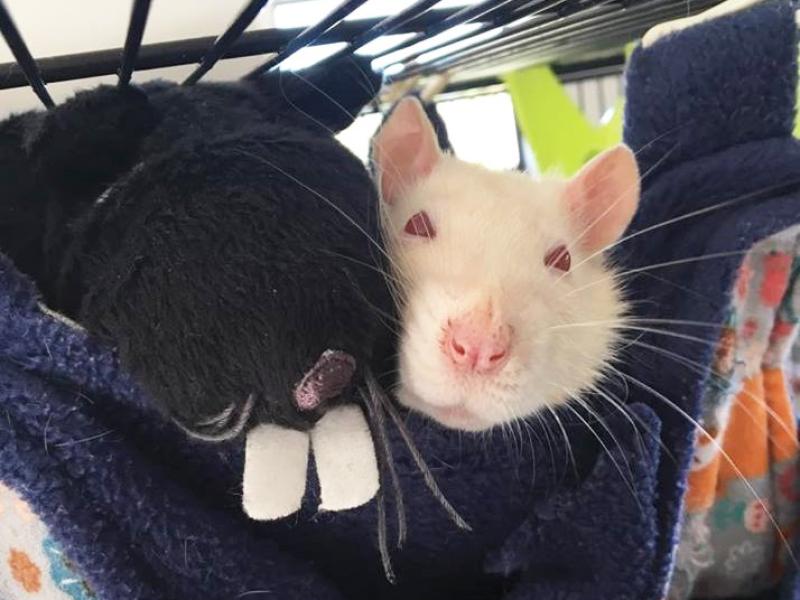 The life of Lewi and how he got to live out of the labs!

The tale of Lewi starts at a research facility in New Zealand, where he was used for experimentation. When the scientist's had finished "using" Lewi, a kind individual saved him from a life that nobody deserves.

Lewi shortly after he came out of the lab

Unlike most of these animals, Lewi was lucky to get a life out of the labs, when his new human (known fondly by him as his “mum”) heard about his plight. Lewi could not have imagined in his wildest dreams that he would spend the rest of his life living free from pain and fear, being doted on every day where he was viewed as a someone, not a something.

When his human first brought him home, Lewi was put in his new bedroom to settle. A short time later, she went back to check that he was settling okay when she got a huge fright. There he was, lying belly up with his two hind legs stretched out in front of him; Lewi's poor "Mum" thought he had died! She came to discover quickly, that this is his chosen pose of relaxation. He was also very shy and would initially only come out of his little home if his human tempted him with some chocolate baby custard.

That first year Lewi spent out of the lab he blossomed into the sweetest, most gentle soul. After the first few months of hard work from his "mum" and a big leap of faith on Lewi's part, he learnt how to trust a human, which he never could before. He discovered the small things in life that can be enjoyed, such as trying new foods!

His human "mum" reports that the most rewarding experience of all has been watching Lewi build relationships with his fellow rat friends. Like a lot of lab animals, Lewi most likely was kept in isolation during his experiments and this has had a lasting impact on him. He would often panic when his male rat friends would play, so "mum" had him neutered so he could spend the rest of his days living the slow-paced life with the ladies. When Lewi is not eating snacks, socialising with the girls or having a cuddle with his human, he can often be found fast asleep in his hammock.

A few weeks ago Lewi had to leave this world. But his memory remains — a brave, trusting, inquisitive creature who enjoys a lot of the same things we enjoy in life. But physiologically, anatomically and biologically, we are not the same.

Why choose to hurt another living feeling being? Students learn either better or equivalently 92% of the time using non-animal teaching methods, according to 50 different studies. Students should learn without hurting anyone.

Medical advancements are slowed dramatically using animal experimentation because accurate science starts with accurate models - we are not 70kg rats! Scientists tested penicillin on rats and found it caused limb malformation in offspring, yet it is effective in humans. Imagine how long it takes to discover drugs and cures because certain animal trials have led us to believe it wouldn't work on humans!

On top of the lack of medical progression, human beings are also often hurt in clinical trial when a treatment, drug or cure is tested on them because it worked well in the animal trials but that couldn't predict our human bodies response! If their bodies are the lab tools, everyone suffers.

The University of Otago used 2752 rats alone in 2016 for research, testing and teaching. 34 lived. All the others were killed during or after their "use" by the university.  That's a 98.76% mortality rate. Read more about the #StopTheOtagoAnimalLabs

Using animals like Lewi for research, testing and teaching needs to be in New Zealand's rearview mirror. Let us move forward for the animals being used and abused as mere lab tools, for the people that are desperately waiting on reliable medical intervention, and for the advancement of science.