DONATE NOW
It's Impossible for me to Support This Burger 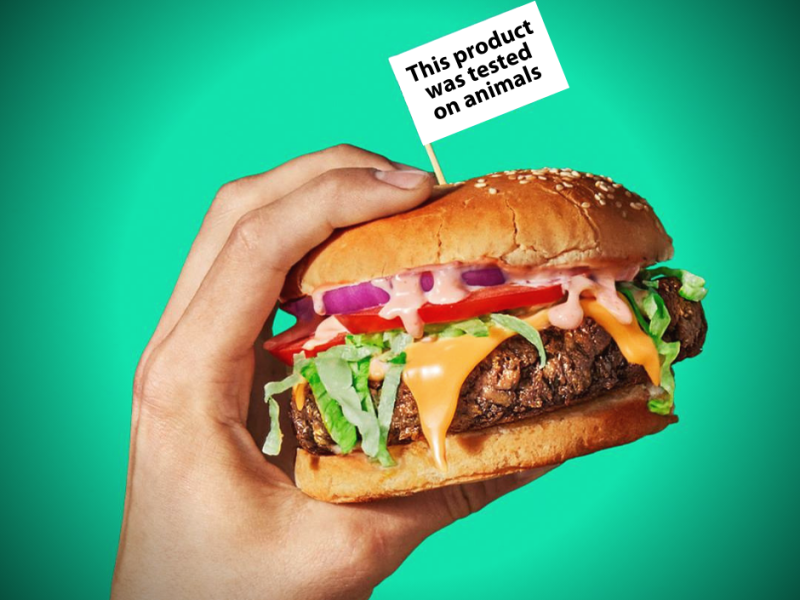 It's Impossible for me to Support This Burger

An opinion piece by our Executive Director, Tara Jackson, on 'Impossible Foods' disappointing decision to test on animals.

By now it is highly likely that you will have seen news articles on the new plant-based burger pattie created by Impossible Foods called the Impossible Burger. The development of this 'vegan' burger has caused debate amongst members of the vegan community due to the fact that Impossible Foods tested its product on animals.

Some vegans say, 'oh it's worth it because it's going to save millions of cows from being killed and eaten around the world,' while others say 'no real "vegan" company would ever test their products or product ingredients on animals.' My disappointment with the Impossible Burgers' decision to test on animals is based on their choice to use and therefore endorse animal-based models to try and predict the human response.

It is important to first note that Impossible Foods could have avoided animal tests altogether. Originally, Impossible Foods approached PETA asking for advice on testing requirements. PETA’s Regulatory Testing Division has worked with a wide array of companies to help them side-step regulatory requirements, using data collected through a battery of non-animal tests and analyses to build a case that would be considered 'equivalent' to tests on animals. PETA offered to meet with them to help them navigate this territory but this offer was ignored.

About a year later Impossible Foods disclosed that it had commissioned tests on animals. After this, they then commissioned a second set of tests that were lethal and involved the use of rats purchased from the notorious company, Charles River Laboratories.

Impossible Foods told me that it could only secure a “no questions” letter (which is the ultimate “stamp of approval” for safety and consumer confidence) by conducting tests on animals, but they didn’t really know that!  Government agencies may, on paper, require that tests be carried out on animals, but companies can use a battery of non-animal tests and present a case to the agency.

PETA has worked with Fortune 100 companies to help them navigate the regulatory terrain and side-step animal testing requirements—and they would have happily done this for Impossible Foods. They don’t charge for this consultancy and it tends to be a win-win proposition since companies can save money and animals are saved.

When massive companies like Dow and DuPont are willing to work with PETA to try to avoid conducting tests on animals, it’s really disappointing that a company that claims to be vegan turned down the offer. Even the multibillion-dollar global meat manufacturer NH Foods has pledged to stop all animal testing from 2020 onwards.

It is disheartening to see a company who I would have hoped would be an ally on this issue [ending animal experimentation], partaking in a practice that is not only cruel but it is outdated and now proven not to be scientifically viable. By claiming to have done animal tests to make sure their product is safe for human consumption, their company is helping endorse the misconception that animals are appropriate models for humans.

One of the biggest barriers that we face as we work to end animal experimentation is public perception and the misconception that animal experimentation is a necessary evil that saves human lives. We know that this isn't accurate —  the FDA states that 9 out of 10 new human medicines fail the first stage of human (clinical) trials because animals cannot predict human outcomes.1 We also know that millions of years separate humans from animals, on their different evolutionary paths, and that this produces crucial differences in anatomy, metabolism, and physiology which is now objectively demonstrated to invalidate the use of animals to try and predict human responses in disease research, medical testing, food testing and cosmetic testing. For more on this current scientific knowledge please visit Trans-Species Modeling Theory and the British Medical Journal’s Editor’s Choice.

To quickly highlight this further, in 2003, a landmark study closely examined 25000 articles published in leading science journals. It measured the translation rate of basic research into clinically useful treatments. The result was astonishingly low: 0.004 percent, to be precise.2

I hope that one day soon, Impossible Foods announces their acknowledgement of the invalidity of animals models for trying to predict human outcomes, to send a powerful message to their consumers and to industry – that the animal model is now proven to have never worked in the first place and needs to be replaced with viable methods that are human-relevant.

To summarise while I'm not expecting perfection from Impossible Foods, there were two opportunities that they missed here:

#2. Using this opportunity to highlight the failure of the animal model for predicting human responses

Note: The decision many companies make to conduct cruel and invalid tests on animals is often driven by outdated regulations and mindsets and the desire to make health claims on products (i.e. to push more sales). Consumer pressure has the power to change this, for example, Lipton Tea ending cruel tests on animals came after 40,000 people contacted their parent company, Unilever urging them to stop testing their tea on animals.

Watch the video by PETA below for more information on the Impossible Burger: