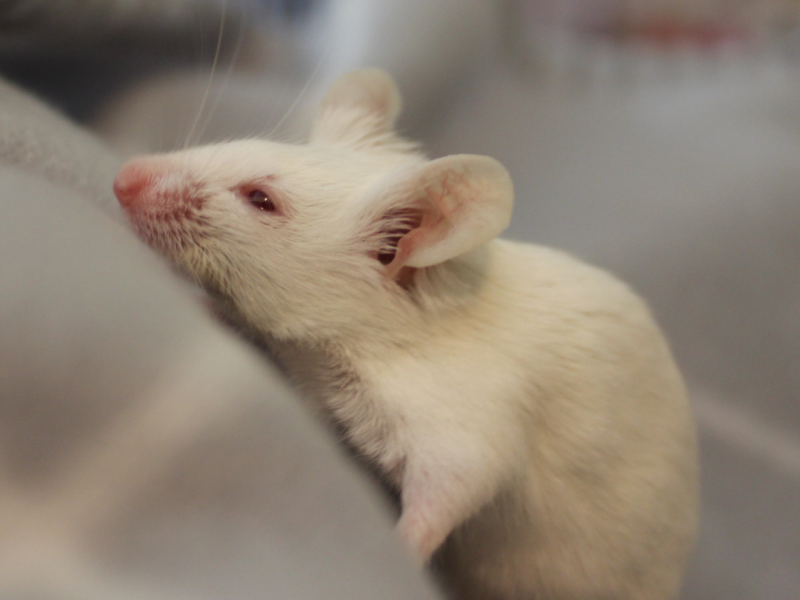 The Forced Swim Test (FST), also known as "the behavioural despair test" is used to try and test potential psychoactive drugs, such as the effectiveness of anti-depressant drugs and the impact of other behavioural manipulations.

In the FST, an animal, usually a mouse or rat, is given a particular drug or is subjected to another stimulus and is then dropped into an inescapable beaker partially filled with water, where they are forced to swim until they are close to drowning.

Naturally, the animals try to escape by either trying to climb out or by diving underwater to try to find a way out. They paddle furiously until they eventually give up and float. The amount of time that the animal spends struggling versus the amount spent floating is then measured.

This test is being conducted right here in New Zealand. Rats and mice are being subject to this horrific test under the false guise that their suffering and pain will help people. So far, we know that this test has been approved and conducted at Victoria University and the University of Otago and we urgently need to stop this from happening any longer!

We are asking the NZ Government to not only ban the Forced Swim Test in NZ but to also conduct a full review and evaluation on the validity of animal tests used for psychological tests in NZ. Using animals to try and predict human outcomes makes no sense. Please sign the petition today!

To help the many people suffering from addiction and depression, researchers should be looking at human-relevant studies, not torturing and nearly drowning mice and rats.

Researchers use the Forced Swim Test in an attempt to model human 'depression'', with the idea that a depressed animal, typically a rat or a mouse gives up earlier. The immobility response in rats and mice is interpreted as they are 'too depressed to continue'.

Experimenters attribute the floating condition to an animal who has “given up,” whereas a longer time spent struggling indicates a less depressed animal. Other members of the scientific community argue that this indicates an adaptive survival strategy and does not represent a depressed state.

What’s wrong with it?

People for the Ethical Treatment of Animals (PETA) scientists have found that in the US, in 30 years from 1989 to 2018, experimenters gave animals 47 different test drug compounds before subjecting them to the FST. 36 of them "showed promise" based on the invalid interpretation of the test. But exactly zero of those are now on the market to treat human depression.

Read more on the invalidity of the Forced Swim Test here where we have linked a fantastic article by Dr Emily Trunnell, a neuroscientist and research associate for PETA in Norfolk, Va.

What should be done instead?

The FST is misleading and cruel and its use should be discontinued.

Relevant methods for determining human antidepressant efficacy and to test neuroactive drugs would include in vitro toxicity testing on human platforms.

For example, novel compounds might be identified using mathematical or computer modelling of human systems, or by a drug-repurposing program (I.e. IBM Watson for Drug Discovery in the US), this analyses millions of documents and synthesises multiple sources of information to show connections and relationships among genes, drugs, diseases.

Epidemiology (the study of naturally occurring disease and health in human populations) is also another viable replacement. According to the Addiction Practitioners Association of Aotearoa-New Zealand Incorporated (DAPAANZ), approximately 12% of New Zealanders will experience a substance use disorder in their lifetime and according to the NZ Health Promotion Agency, one in seven people will experience depression before they are 24 years old. So there isn't a shortage of people whose existing data could be analysed and who could even volunteer to be in non-invasive studies.

The animal model is broken and the Forced Swim Test highlights this. Instead of continuously using a broken model, time and resources should be spent on developing more human-relevant test methods.

Animal researchers will claim that there are no FDA-approved medications to treat stimulant addiction. Unfortunately, the FDA does currently require pharmaceuticals to be tested on animals—normally one small species and one large species. However, the FDA does not explicitly require the FST for potential anti-depressant medications.

This test has been used since at least the 1950s when Curt Richter forced rats to swim in cylinders of water until they drowned. One of Richter's most notorious finds happened when he placed two different groups of rats in different cylinders. The untouched rats drowned within a day whereas when he removed half of the rats from the second group, saving them from drowning, the rats in this cylinder swam for 3 days before becoming exhausted and drowning. This was interpreted as when the rats have 'hope', they swim for longer. Roger Porsolt then popularised this test in 1977.

The Forced Swim Tests that are being conducted in NZ are based on these awful experiments from over 60 years ago!

Global Perspective on the FST

Just recently (December 18, 2018) pharmaceutical giant AbbVie committed to not conducting or funding the Forced Swim Test after talks with PETA. They have implemented a new policy stating that AbbVie "does not currently use or intend to use or fund animal forced swim tests" and has posted this on its website. This shows that even the pharmaceutical industry is recognising this test as outdated and irrelevant.

International animal advocacy group PETA has also launched a campaign against the Forced Swim Test. They are targeting pharmaceutical giants and asking them to stop using these cruel and irrelevant tests.

"Because of advances in evolutionary biology and complex systems we now understand why the Forced Swim Test does not currently, and never will, have predictive value for human response to drugs and disease. It is a waste of time and money and results in harm to patients and animals."

Other articles of interest:

The Invalidity of the Forced Swim Test

Drowning Rats and Human Depression: Positive Psychology for Whom?