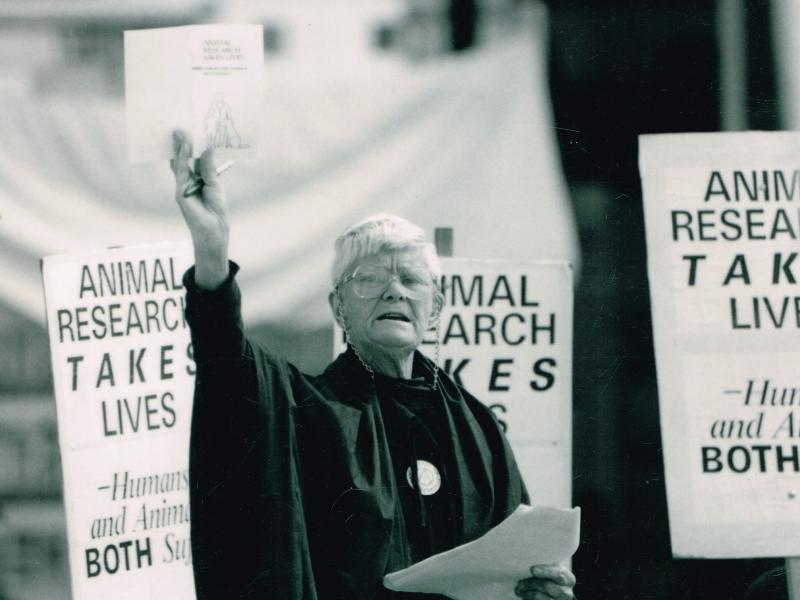 Bette Overell, who founded NZAVS in 1978, was inspired by the works of Hans Ruesch, a famous Swiss medical historian whose book "Slaughter of the Innocent" and CIVIS publications brought to light the misleading, dangerous and fraudulent practice of animal experiments.

Motivated by the growing number of international scientists, doctors, veterinarians and societies calling for abolition, Bette soon established a large number of members and supporters determined to make vivisection illegal on scientific grounds. In this, Bette was totally supported by her wonderful husband, John, who took on the role of Honorary Secretary with Bette as President for 15 years.

Bette was born in Warrington, U.K, joining the ATS (Auxiliary Transport Service) as a "capstan" operator in 1945. She saw service in the UK, Austria and Germany. She was demobilised in 1947 having reached the rank of corporal.

After the war, she took a 'jaunt' to NZ and met her future husband, John Overell, a fellow passenger during the voyage. John was born in Dunstable, Bedford in 1922. He enlisted in the Royal Navy as an Ordinary Seaman and had active service with convoy escorts in the Atlantic, the Mediterranean, the Indian Ocean, and off the coast of North Africa, Java, Ceylon and Sumatra, Egypt and France.

They arrived in Wellington on a Sunday morning in 1948 remarking that "all the shops were closed" and wondered where they'd come to. Bette and John married in 1950. They bought land in Pukerua Bay and built one of the original houses there. Bette was employed as a typist at the Ministry of Works, then later a secretary at the Ministry of Foreign Affairs, while John was Clerk of Works at the Wellington City Council, overseeing major constructions across the Wellington region for many years.

In 1959, they purchased a large property in Rangiora Avenue, Khandallah, Wellington where they built their family home and where their two sons were born. Bette's office was in a cupola which John and the boys built, and this was to be the NZAVS headquarters until they retired.

While working at the Ministry of Foreign Affairs, Bette recounted secretly running off antivivisection material on the Ministry of Foreign Affairs’ photocopier. She was once found out and reported to her boss who fortunately let it pass. She would also clandestinely rush across the road to Broadcasting House for live radio interviews then rush back to work again, undetected.

When Bette organised her 1st march to Parliament in 1982, her boss was taken aback to hear on the news that his secretary was the organiser. WLAD marches were spectacular annual events in the Capital and around the country for many years. They also provided an unwanted vehicle for other groups who took advantage of these occasions to promote their own causes.

To prevent this from happening in future marches, Bette had tabards made for the NZAVS march participants, who then carried uniform banners. The tabards were worn to the Select Committee hearing in 1991, and while the Society's ten representatives were kept waiting for 20 minutes outside the committee room, David Lange, ex-prime minister at the time, inspected the group, obviously finding the tabards interesting items of curiosity in the context of the Beehive.

Bette's momentous book ARTL ("Animal Research Takes Lives - Animals and Humans Both Suffer") was launched in 1993, a daunting undertaking, which required painstaking research into multiple aspects of vivisection here and abroad. This work, made financially possible through a generous legacy from Miss Clara Grace Genge of Levin, serves as a valuable tool for antivivisectionists with a wealth of referenced evidence from medical journals, international doctors, vets and scientists. Bette was assisted by Phil Clayton and by Deborah Garrett in preparing the work for publication. ARTL was written in response to the Ministry of Agriculture's promotional booklet "Animal Research Saves Lives".

After retiring from active involvement with NZAVS, Bette and John retired to Mount Maunganui and enjoyed travelling around Australia, Europe and the Pacific Islands. They were both keen walkers, and would sometimes walk along the beach from Mount to Papamoa, where they ate a cut lunch, then walked back.

Holidays abroad weren't always relaxing or worry-free: Bette recounted one occasion in Broome when she heard feeble meowing under a fashion store and had to crawl under the shop floor from the outside pavement to rescue a sick, starving cat. She clandestinely nursed it back to health at her motel and paid the local vet to find a good home for it.  The vet wrote to Bette soon after she returned to NZ with the good news that a home had been found.

The hard work Bette and John had put in over the years, both in their fields of employment and for NZAVS, took its toll health-wise, as both suffered illnesses in their later years, Bette undergoing major heart surgery.

John died on 8 February 2005 aged 83, and Bette also 83, passed away on 11 August 2007.   They are buried in the RSA section of Pyes Pa cemetery outside of Tauranga. Bette and Hans Ruesch died within weeks of each other. Between them, they left an invaluable legacy of researched knowledge and experience for their successors to utilise in their task to abolish animal experimentation.