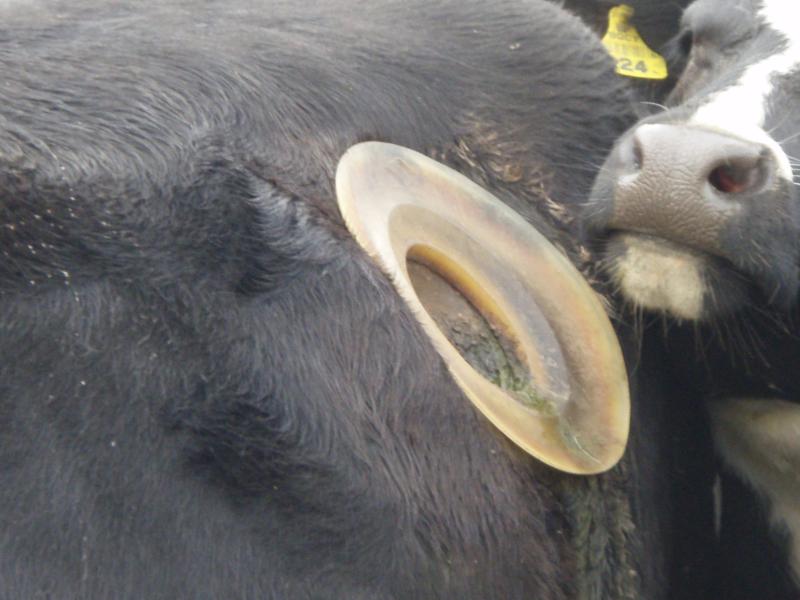 For decades, researchers have artificially created fistulas (also known as cannulas) in ruminant animals such as cows, sheep and deer. These are essentially window-like holes in the side of an animal's body.

Star News did a story on fistulated cows in February 2020, check it out here.

Fistulas are tubes that are created surgically to connect a cow or sheep’s stomach to her skin. The outside of the fistula is covered with a plastic cap that can be opened by scientists to remove stomach contents for analysis or introduce foreign substances such as tracer gases or chemicals such as urea. It is a painful procedure and cows are still suffering from the intrusive surgery up to 11 days after the surgery.[1]

Fistulation is used in experiments aimed at trying to increase the profits of the agricultural industry. For example, it is used to try:

1. Investigate how the ‘productivity’ of animals can be increased (i.e. milk production)

2. Explore how greenhouse gasses can be reduced

3. Improve water quality – specifically to investigate how the diet of cows influences the amount of nitrogen in their urine, which in turn impacts on water quality.

4. Modify the gut microorganisms of the animal with the aim of reducing the risk of food poisoning when humans eat animals that may have become contaminated with gut bacteria during the slaughter process.

5. Provide rumen fluid to unhealthy animals. For example, because of the intensity of the dairy industry and the strain placed on cows many experience health problems. Rumen-fluid is sometimes taken from a healthy fistulated cow and given to sick cows.

There are fistulated animals in NZ right now! We have proof that there are at least three fistulated cows at a Lincoln University Research Farm (see photo below).

Since there is a real lack of transparency in the animal experimentation industry, it’s impossible for us to know the full extent to which animals are being fistulated in NZ. Many animals could exist around the country with holes in the side of their bodies…

We know that there have been fistulated animals at the following places:

These experiments happen legally in NZ and the use of animals in this way will have been officially approved by an Animal Ethics Committees. Also, there is no law to protect animals from this procedure.

1. Many of the experiments carried out were inconclusive, or the results obtained were not useful. For example, an experiment comparing the greenhouse gas emissions of heifers and mature cows concluded that there were no significant differences. [2]

Another experiment found that methane measurements of fistulated cows using the ‘GreenFeed’ technique were inaccurate, as up to 40% of the methane escaped via the fistula.[3]

Similarly, an experiment on fistulated sheep did not find any links between the kind of feed given to the sheep and greenhouse gas emissions.[4]

2. There are alternatives to fistulation such as buccal swabs.[5]

3. There is no need for humans to consume meat or dairy and avoiding animal products is a much simpler and more effective way to reduce greenhouse gas emissions and improve water quality than carrying out complicated and expensive experiments that cause animal suffering.

4. In the case of respiration chamber experiments, experimental results are influenced by the fact that animals are of different sizes, behave differently, and faeces and urine at different times. Consequently ‘environmental conditions inside the chambers are not only different between chambers, but conditions change within a day.’ [6]

5. Experiments to try and make cows produce more milk and meat are unlikely to benefit farmworkers, the environment or the community in general – they are designed to increase the profits of companies such as Fonterra, research institutions, and industry organisations such as Dairy NZ. Animal experimentation, agriculture and capitalism are deeply interconnected.

You can read more about experiments involving the creation of fistulas in animals in NZ here.

You can either send an email to info@lincoln.ac.nz and make sure it’s addressed to the Animal Ethics Committee or you can send them a letter via post.

Find an example letter that you could use as a template here.

Reminder: NZAVS only promotes non-violent actions and tactics. We do not condone violence or abuse of any kind, verbal or otherwise. Please remember this when communicating with Lincoln University. We advocate respect for all beings, including humans. It also becomes easier to discredit our message when abuse of any kind is present. We are all angry about what happens to animals, but we need to channel that constructively.

How NZAVS is helping stop cruel tests like this

NZAVS helps the cows by exposing these cruel tests and creating uproar so that Animal Ethics Committees will think twice before allowing intrusive tests to happen in future.

NZAVS also works to achieve legislative and systemic changes so that the use of replacement methods are prioritised, cruel tests are banned or not approved by Animal Ethics Committees, and more funds are invested into non-animal based and viable research methods.

Ultimately, NZAVS works to end animal experimentation as a whole through legal changes, societal pressure and by encouraging positive change within the industry.