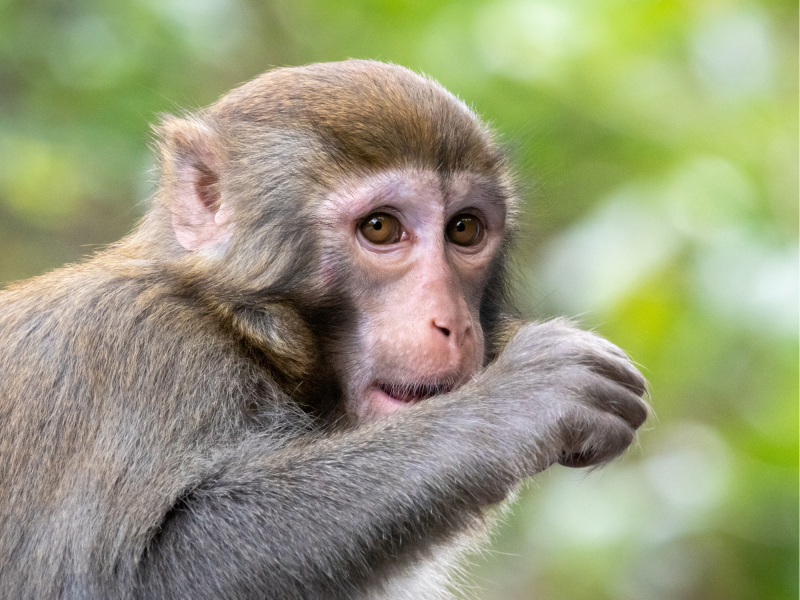 Following on from yesterday's news about kittens in Australia who had pig cells implanted into their ears, we have found more cases where New Zealand and the Auckland Island Pigs are linked to cruel animal experiments.

Today we're exposing what has happened to monkeys in China and rats right here in NZ!

A group of 15 male Rhesus monkeys were subject to a procedure that intentionally causes brain injury — a lesion was made in their brain to try and replicate symptoms of Parkinson's Disease.

The monkeys were then observed for symptoms of neurological impairment, all of the previously healthy monkeys showed signs of the following:

It's worth highlighting that these symptoms in animals do not accurately represent the real disease in people — Parkinson's Disease is a disease that only occurs in humans. Therefore the use of animals in this way is not only cruel but also invalid and fundamentally flawed.

Monkeys were then subject to intrusive brain surgery; they were anaesthetized and their heads were fixed in a primate stereotaxic frame, holes were drilled into their skull and capsules containing cells from Auckland Island piglets were implanted into their brains.

Then 24 weeks after the implantation, the monkeys were killed.

Even the method of euthanasia is quite shocking: the monkeys were anaesthetized and perfused transcardially. In this technique, the animal is anaesthetized, the chest wall opened, and the beating heart exposed. A needle is then inserted into the heart to pump fixative into the systemic circuit. The tissue of interest is then harvested and placed into a fixative bath.1

Example of a primate stereotaxic frame (image sources at bottom of page):

The use of the Auckland Island pigs

To obtain the cells that were implanted into the brains of monkeys, the cells were surgically removed and "harvested" from newborn piglets (5-15 days old). The publication does not give further details of this procedure.

Although the cruel experiment involving monkeys took place in China, the first part of this procedure (where pig brain cells were "harvested") was done by Living Cell Technologies, a New Zealand based company and was approved by an NZ Animal Ethics Committee.

Rats were anaesthetized and placed in a stereotaxic frame where their heads were cut open, their skulls drilled into and capsules containing pig cells were implanted using a catheter.

After 4 and 6 months the rats were killed, their brains were drained of blood and dissected.

The rats in this experiment were used as models of brain disease in humans which we know is an outdated and unreliable way of using animals!

The use of the Auckland Island pigs

To obtain the cells that were implanted into the brains of the rats, newborn piglets (6-12 days old) were anaesthetized and euthanized by having their blood drained (exsanguination).

These pigs are being exploited on an ongoing basis that even extends out of New Zealand, their cells are being used in other countries in a continued chain of animal exploitation. You can read more about them here.

What do we want?

We are also currently developing a campaign which will target policy relating to and funding available for research in NZ. Future work needs to be done to redirect and prioritise funding into ethical, human-based research.

When did these experiments take place?

The use of animals in science isn’t openly talked about in NZ. There are still a lot of dark corners that we have no access to including what private companies are doing. As private companies aren’t subject to the Official Information Act, they aren’t required to tell us anything. The main way we find out about experiments that have happened in NZ is when we actively go digging and searching for publications. This is how we found out about this experiment.

Why are you making a fuss about "life-saving" research?

We don’t disagree with the intent of the research; we want humans to be helped too! But in an age of human stem cell technology and the production of human "mini-organs" as well as 3D bioprinting, it doesn't make sense to continue exploiting animals. For example, by using a patients' own stem cells, there is no risk of rejection or the transmission of viruses. Not only are these technologies relevant to human medical research, but they also provide a much safer supply of human organs. Science and ethics can go hand in hand; we don't need to exploit animals to help humans.

How can people help?

Donate today to help the continuation of these exposés, bringing to light cruel, barbaric experiments and demanding positive changes for pigs and other animals cruelly exploited in the name of science.