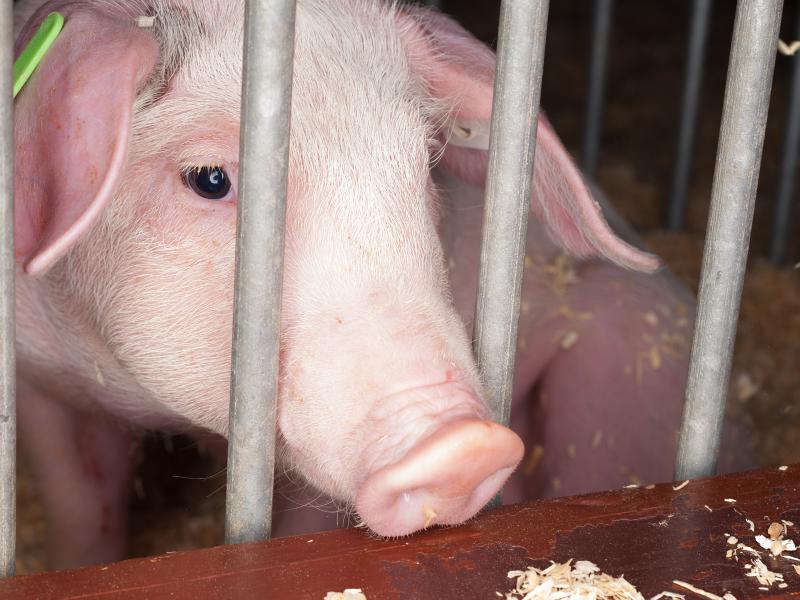 EXPOSED: Young pigs have wounds cut into their backs

We recently discovered a shocking experiment on pigs that happened right here in Aotearoa! Young pigs had 20 wounds cut into their backs for research aimed at using the pigs' bodies to try and predict what might happen in humans.

Five female pigs were intubated under anaesthesia. Animals were positioned on their stomachs and the hair on their backs was removed. In total 20 wounds (5 rows of 4 wounds) were made in the skin of each animal, separated from one another by 30 mm. Then wounds were deepened with biopsy punch and tissue was separated from the underlying muscle using a scalpel blade.

At days 3, 7, 14 and 28 after the surgery, five wounds of each treatment (sheep tissue, pig tissue and no treatment) were biopsied. This meant that the wounds and the surrounding areas were cut out of the body of the pigs.

At day 42 post-surgery, their suffering came to a peak and the five, young sows lost their lives with a single captive bolt shot to the head, their throats cut, and their limp, lifeless bodies hung up so that the blood could drain out.

The pigs were given anaesthetics, but this doesn't justify this experiment. Imagine the pain you'd be suffering from after so many intrusive procedures.

Why this is wrong

Pigs dream like we do. They are extremely intelligent, curious and insightful animals, they are not disposable lab tools.

There is copious evidence that another species is not a reliable model for the human response. Furthermore, there are many scientifically viable and human-relevant replacements available that do not involve harming animals.

Whether it's due to scientific or ethical reasons, animal experimentation is always unacceptable.

Be the voice for these animals used for science and make a gift today towards the Striking at the Source campaign.

You can demand  transparency, mandatory filming of such experiments which will make them think twice to do such despicable acts on an animal

It is time to hold scientists accountable and shake the foundations of an industry shrouded in secrecy. Make a gift today to support the Striking at the Source campaign and make significant changes for animals possible.

Your donation today will go towards our Striking at the Source campaign, funding:

• Upgrading our science; this includes redirecting funding towards non-animal-based research methods and away from cruel and outdated animal experiments, conducting reviews of the validity of the animal model and prioritising the use of viable and non-harmful research, testing and teaching methods. Rather than blindly doing what has always been done, decision-makers should back the most scientifically valid research, and we know that this is not animal experimentation.

• The improvement of regulatory oversight and Animal Ethics committees: this includes establishing an independent body for animal welfare and improving the way Animal Ethics Committees are run. For example, these committees shouldn't be able to be made up predominately of people who are involved in animal experimentation themselves. This system is set up to favour and perpetuate the use of animals; we are going to change that!

• Transparency and openness: this includes the mandatory filming of animal experiments and the footage being made publicly available. We want to turn the thick concrete, windowless walls of animal labs into glass and hold researchers accountable for what they are doing!