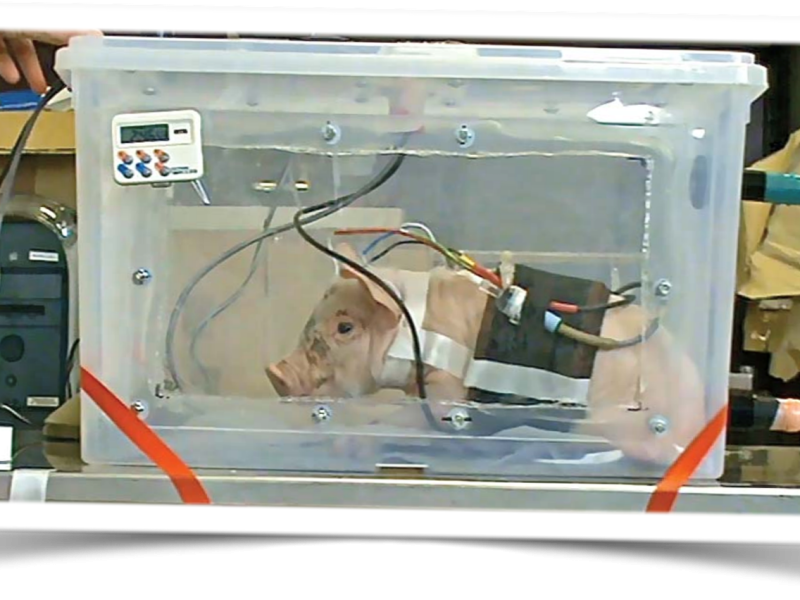 During an investigation, we found proof of Kiwi scientists suffocating baby pigs in experiments funded by the American Pork Board. The piglets were exposed to gas without oxygen in it, leaving them gasping for breath and trying to escape. The scientists recorded the responses as the animals slowly died from lack of oxygen.

There are times on pig farms when pigs become ill or injured and instead of taking them to the vet to make them better, the farmer kills them, as this is the more economically feasible option.

The most common method for pre-weaned piglets in New Zealand is to hit them on the head with blunt force. In other countries, however, gassing is also an option.

Because researchers have discovered already that piglets experience stress while being gassed with CO2, they are trying to find out if perhaps a different gas or gas combinations cause less stress for the piglets before losing their lives.

So, here’s what they did: the experiment

With the approval of a New Zealand University animal ethics committee, the researchers took 30 male piglets approx. 17 days of age from a commercial farm and transported them to the University in a closed vehicle.

Here, they were gassed to death in little plastic containers with transparent lid and walls. This way researchers could see into the container and film the piglet's reaction as they slowly suffocated to death.

The terrified animals desperately tried to escape the plastic container, raising their forelegs against the sides of the chamber, and running or charging at the walls or lid of the chamber. They were having trouble breathing, gasping for breath, until they would collapse and their small bodies would convulse. Then, breathing would stop, and they would be dead. It took them between 1.5 and 5 minutes to die.

Apparently, some of the escape attempts and convulsions were so vigorous, researchers were unable to measure EEG data as the recording electrodes had been displaced.

This is why they repeated the experiment, but with the animals lightly anaesthetised to prevent them from trying to escape this gruesome fate.

The researchers filmed this experiment. In their own words "during gas exposure, behaviour was continuously recorded until death using two digital video recorders."

They are now refusing to give us access to this footage which we think is odd! Shouldn't the researchers be proud of the work they've done if they truly believe that it's justified? Shouldn't they be able to stand beside their own work publicly and proudly?

The experiment was cruel and unnecessary. The same methods would likely be considered animal abuse if a worker did it on a farm here in New Zealand. Yet it was approved by an animal ethics committee and technically legal because it happened in a lab instead of a farm.

Both sets of research reached the same conclusion: suffocating piglets with these gas combinations involves too many welfare compromises.

The 2011 research concluded by stating “the degree of welfare compromise observed in all treatments suggests that other alternatives … should be investigated.”

In 2018,  the researchers reached the conclusion that suffocating baby pigs involved too many welfare compromises, and other methods should be investigated, concluding “there is still a need to continue to evaluate alternative on-farm methods of euthanasia.”

The ethics approval process is broken

Experiments in New Zealand need to go through an ethics approval process, a process which is severely flawed.

Our ethics approval process needs to urgently implement a stronger method of checking past experiments, to ensure that experiments aren’t unnecessarily repeated and suspicious patterns of funding are checked and questioned. A national database containing this information needs to be developed to assist ethics committees in doing their jobs.

You can help today by signing our Striking at the Source petition, which calls for a reform of the ethics process.