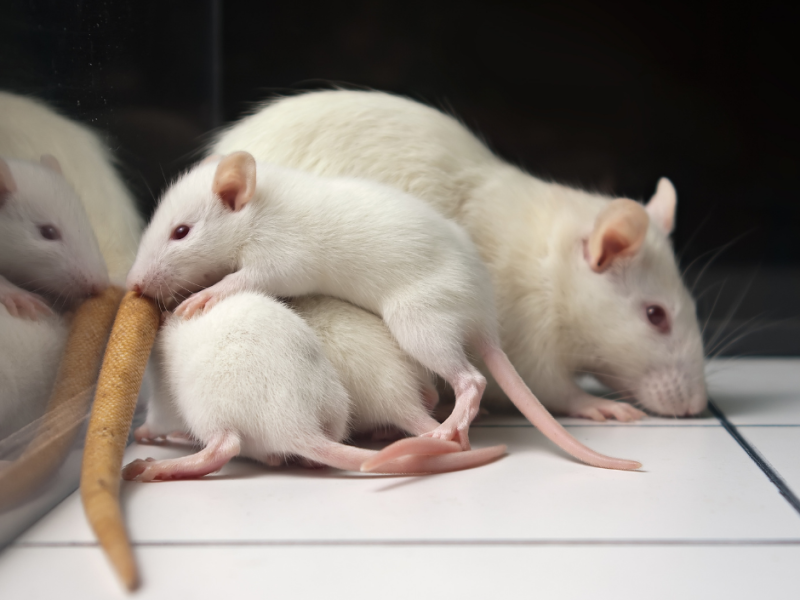 Mothers Day is a day to spoil, pamper and remember the mothers of Aotearoa, New Zealand.

The bond between a child and their mother is naturally strong; mothers innately want to protect, nurture and defend their children from harm or danger. Non-human animals are capable of this too!

Unfortunately, many mothers, of many different species, are suffering in the name of science, right here in NZ.

This is why for this Mothers Day, we would like to shine the spotlight on those forgotten mothers who are suffering in the laboratories. Please consider making a small gift in memory of those who aren't so lucky.

There are many ways mothers are exploited in and for experiments, and we will discuss just a few. It did not take us long to find several experiments where rat mothers and their babies were exploited (warning, this content may disturb some people):

Many mothers are used as breeding machines. This means these mothers have to experience the anguish of being separated from their babies to never see them again. What does it feel like to lose a child? it will be the same for these animals, over and over and over again. If they have bred too many animals, they just kill them with no regard for life.

In 2019 alone 136,679 animals bred specifically to be used in science were killed as surplus as they didn’t end up being “needed.” That’s a heart-breaking number of pregnancies, births and separations happening between mothers and their babies. None of these animals ever had a chance, their two options were:

Manipulation of the number of babies

It is not uncommon for litter sizes to be 'standardised'. What that means is that perhaps one litter has 12 babies and another seven, they will take two babies away from one litter and add them to the litter of seven to standardise to litters of nine babies. Any excess babies are killed, sometimes by cutting their heads off with scissors.

The exploitation of the mother-child relationship

In one experiment relating to depression in humans, mothers and their babies were used in the same experiment. To create maternal separation in rats, rat pups were taken away from their mothers for three hours daily from the very young age of two to 14 days old. Furthermore, at the age of only 90 days, the rat pups were killed by 'two-second high energy focused microwave irradiation.

Experiments on the babies themselves

Sometimes babies are experimented on and then put back with their mothers afterwards. The mothers will notice that their babies have been suffering or still are, but they are unable to do anything to protect them. We found an experiment where rat pups were injected with drugs, put in chambers with less oxygen, and in between put back with the mother for two hours. Can you imagine what that must have felt like for the mother?

In this experiment, litter sizes of 36 mother rats were 'standardised' to nine pups. Each mother had half of their teats sealed with surgical adhesive to cause milk accumulation and swelling of the teats. The mothers were killed at 0, 6, 12, 18 24 and 36 hours after sealing the teats by gassing and cervical dislocation (a euthanasia technique of small animals by applying pressure to the neck and dislocating the spine from the skull or brain).

We don’t like being the bearers of such sad news, especially on a day designed to celebrate the hard work of all Mothers, but we wouldn’t be doing our jobs if we didn’t speak up for the mums whose stories would never be told otherwise.

Please, still celebrate the day how you’d planned and feel good in doing so, we just ask that you take a minute to think of the forgotten mothers who had no chance of being able to protect their babies or care for them in the way that they desperately wanted to. A mother’s love is a force to be reckoned with and with heavy hearts we can only imagine the fight that these animals would have put up as their babies were taken away.

We exist to change this and we’re working hard to create a world where no mothers or babies are forced to endure cruel experiments. Thank you for supporting this important cause and we hope you join us in honouring all mothers tomorrow!