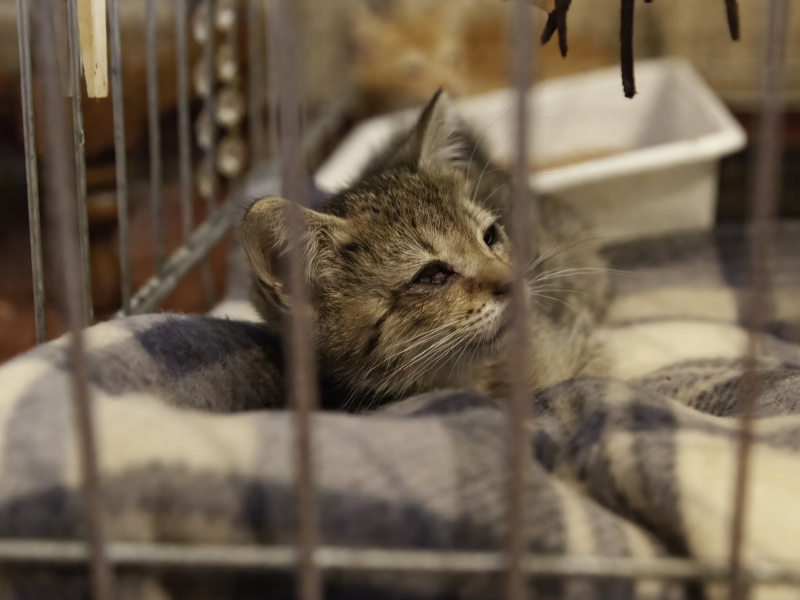 In many places around the world, cats are considered the most beloved of furry friends, and here in New Zealand, things are no different. Nearly half of all Kiwi households share their home with a cat,1 so it’s very likely that you, too, have a much-loved cat in your whānau.

The experiments we’re about to expose may be hard to read; you’ll likely imagine a cat that you know having to endure such cruelty in the name of science. But remember, by being a part of team NZAVS, you are a part of the solution! We are here to end animal experimentation and create a better world for animals, people and science.

From an Official Information Act request, we discovered the following experiment involving cats...

Sixty free-roaming cats were captured and taken to a lab where they were kept individually in wire mesh cages. All they had access to was food and water.

They were left like this for 4 weeks – just imagine how scary that must have been for them, being in a completely new environment, confined to a small space near humans they didn’t know or trust.

Then they were subject to different tests.

Some cats were fed different types of toxic bait, while others were a part of a control group and were directly fed a toxin with a pipette.

Within 20-60min of being fed the toxic bait or toxin, cats began to vomit, had trouble walking and getting up, and/, or they became unconscious.

Any cat who regained consciousness or did not die after 150 minutes was killed with an anaesthetic overdose.

Four cats did not eat at all; their fate is unknown.

The purpose of this experiment was to try and test the efficacy of toxic bait to kill wild cats over time. Based on earlier trials conducted in Australia, Para-aminopropiophenone (PAPP) can effectively kill cats at 20mg/kg within 80 minutes when fresh. This experiment was designed to assess its shelf-life, which is part of the registration process for NZ use.

Here’s what happened to the cats in a recent study approved in 2020.

Para-aminopropiophenone (PAPP) can effectively kill cats, but fresh bait is ‘messy’, so researchers set out to test a new toxic bait.

This is what the bait stations looked like (image obtained via OIA request):