DONATE NOW
We asked the University to Have a Heart and Stop Building the New Lab! 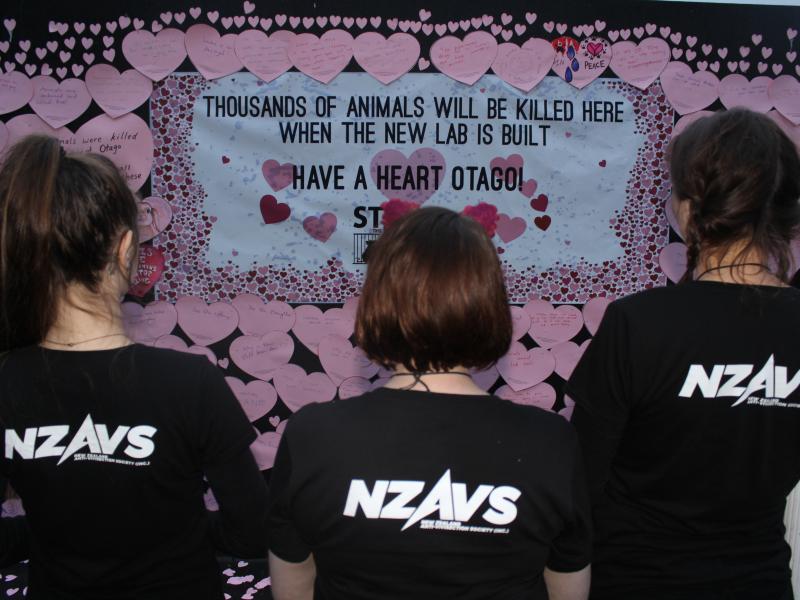 We asked the University to Have a Heart and Stop Building the New Lab!

Thursday 27th October: Heart action attempts to be silenced by the University of Otago

NZAVS volunteers and supporters of the Stop the Otago Animal Lab campaign came together this morning to hang over eleven thousand cardboard hearts to the fence outside where the new animal lab is going to be built.

It was already clear to us that the University won't listen to the science (that animal-based research has been holding back potential advances in human medicine and health), so instead, we are asking them to listen to their hearts.

Chalk paths made from hearts were also drawn by activists that led to the site where the new animal lab is being built from:

- The Clock Tower Building (where the office of Richard Blaikie, the Vice Chancellor of Research and Enterprise is located).

- The Hercus building (where the current animal lab is located)

People could then follow the heart paths and see just how many more lives will be lost every year if the facility is built. The message is clear, we want the University of Otago to have a heart and stop endorsing outdated, unreliable and cruel research methods. This is the beginning of a full weekend of #StopTheOtagoAnimalLab actions that we are hosting in Dunedin! We will also be leafleting every home in Dunedin Central and holding a protest outside the Hercus building where the current animal lab is housed.

How did the University of Otago respond?

Very quickly. By 10 am the University had organised for cleaners to come and remove the thousands of hearts. Many of these had messages like “Please stop testing on animals” and “there are better ways” drawn on them. Many of the hearts were also drawn on by children.

The University is so secretive about animal experimentation, they won’t even allow us to tell the public how many animals they kill annually.

If animal-based research is something to be proud of, why do they need to hide it? This is a very questionable response and it has us concerned that the University of Otago has something more to hide.

They may be able to paint over the windows of their animal lab so we can’t see in and they may be able to remove our signs but they can’t stop us from fighting to end animal testing. #YouCantCleanUsAwayOtago. See the video footage from the Otago Daily Times here.