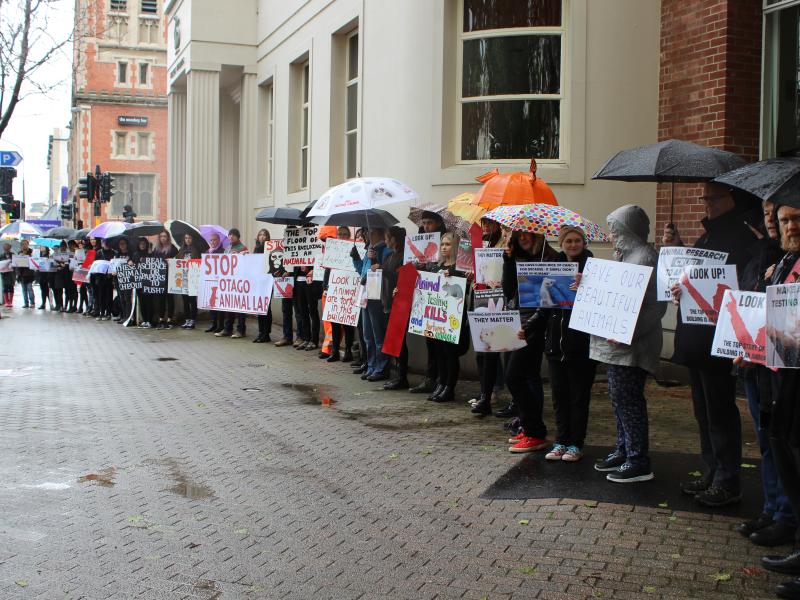 Saturday 29th October- Our Stop the Otago Animal Lab protest goes ahead despite the rain!

Around sixty supporters of the #Stoptheotagoanimallab campaign came to our peaceful protest that we held outside the Hercus Building in Dunedin. The current animal lab of the University of Otago is housed on the top floor of this building.

Why did we hold the protest outside the current lab and not where the new one is being built?

The further this campaign progresses the more we are finding that a large proportion of the public is completely unaware that there is a current animal lab, let alone that there is a new one being built!

Many people walk by this building, daily without knowing what goes on behind those blacked on windows on the top story. When people learn what this building is, the general response is shock and anger that they haven’t been made aware of it earlier.

We will continue to hold regular protests outside the Hercus Building to teach as many people as possible about the true purpose of the top story of that building.

We were very pleased with how many people came despite the rain. It was an inspiring experience to see so many people show up with umbrellas, jackets and big smiles on their faces. Check out the footage that was on 3 News here. The Otago Daily Times footage here and the Scoop article here.