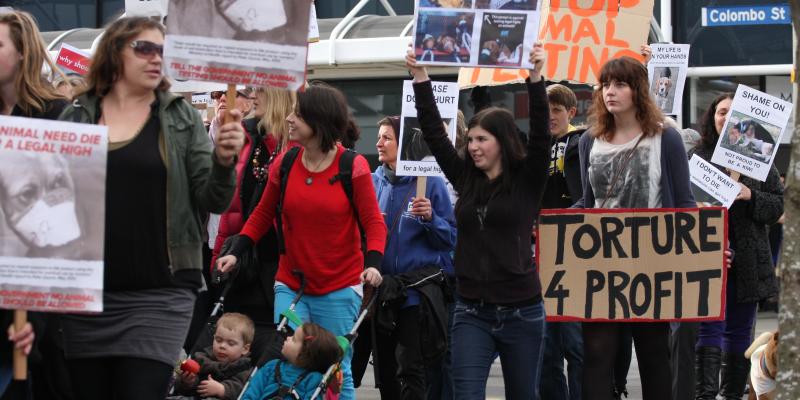 The Psychoactive Substances Bill was first read in the New Zealand Parliament on 9th April 2013. NZAVS had been told by the Ministry of Health to expect the submission period to begin with two weeks notice from the first reading and to extend for about six weeks. Contrary to this advice the submission period began immediately and was only open until the end of that month, a period of approximately three weeks.

Despite this unexpected move by the government, organisations and individuals all around the country mobilised and a huge amount of submissions were made that asked for the data from animal tests to be ruled inadmissible under the legislation.

Unfortunately though, all submissions relating to the use of data from animal testing were returned to the submitters unread by the health select committee. On the 26th April 2013 the select committee was advised that a clause prohibiting animal testing would be outside the scope of the Bill as the legislation didn’t address the types of tests to be required. As NZAVS expected this response in an attempt to avoid dealing with animal testing our submission had asked for a clause prohibiting the use of data from animal testing. We believed that addressing the types of data would be in scope as other restrictions around the data to be submitted in support of applications for licenses are mentioned throughout the legislation.

The Green Party MP, Kevin Hague, on the select committee made a move to allow all submissions relating to animal testing to be considered. This motion was supported by the committee members from Labour and NZ First but was defeated as all the National Party MPs voted against it.

The distinction between ruling out a type of test and the type of data used was missed by the select committee and our submission, and many others that made the same request, were ignored. Later advice to the select committee explicitly stated that clauses that would rule out the use of animal testing data would be in scope and confirmed what we had initially thought. Our submission should have been considered.

Considerable time and resources were devoted to providing the government with the best information possible in order to help them make an informed decision. Advice was sought, and obtained, from international experts in non-animal toxicology testing and included in the submission. Evidence was given on the failures of animal testing to provide useful data. This advice provided an extensively referenced range of possible non-animal tests that had never been considered by the Ministry of Health. The NZAVS submission also included more information that would have been of use to the select committee had they considered it.

All this information was ignored but you can read it here now:

Page five of our submission refers to a report commissioned by the Ministry of Health asking for a possible testing regime that was released to NZAVS under the Official Information Act. The report outlining the proposed testing regime titled “Regulations Governing the Control of Novel Psychoactive Drugs – defining parameter associated with toxicity” is no longer available at the link in the submission. It can now be read here.

The Ministry of Health discussion document based on this proposed testing regime can be read here.